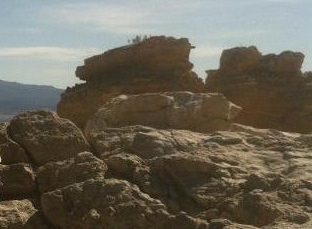 THE TWITTER PITCH – A mountain ranch boy vows to end his dad’s abuse to protect mom. An Hispano-Indian girl wants out from under the restrictions. While the sets of parents argue about who truly owns the land, these two teenagers realize they love each other and have to decide what (and who) needs to be sacrificed in order to share life and land.

CHARLIE AND TRINIDAD – A SCREENPLAY (THE OPENING SCENE)

Open to a bright sun, high cirrus, afternoon. Looking across or along a mesa to the edge of a natural sandstone amphitheater. Find this in Northern New Mexico, north of Abiquiu.

Two MTB riders spit dust from their back tires, heading north towards the rim of the amphitheater.

A boy sits astride his palomino horse to the right of our vantage point, his head and cowboy hat just barely above the sight line of the bike riders. He sees the riders. The riders don’t see him.

Calvin, a MTB rider, dressed in Lycra, brown bicycle shirt – “Is that all you got?” He whoops back to his riding buddy.

David, a MTB rider, dressed in Lycra, yellow bicycle shirt – “I haven’t even warmed up! I’ve been waiting for you to get out of low gear,” he laughs.

David: “But seriously, I’m telling you this deal with all the land grant papers is real and legit. We’ll be FINE. There’s no way it will blow back on us.”

Calvin: “Even if those Indians get kicked off the land? That’s what you want, isn’t it? Those Indians kicked off so your greedy dad can have even more land, right?”

Calvin puts on a burst of speed as he approaches the rim above the amphitheater. David stands on the pedals to catch up. As David looks down to push even harder, Calvin slams on his disc brakes and leans left, into the hill, which forces David right. Towards the edge.

David and his bike can’t stop in time. He flies off the rim of the sandstone, right above the natural stain in the stone that looks like blood. His body slams into the broken sandstone pile at the bottom. There is no movement down below.

Calvin edges towards the rim to look down.

Calvin: “I hope he’s dead. Otherwise, I’m in a shitload of trouble.”